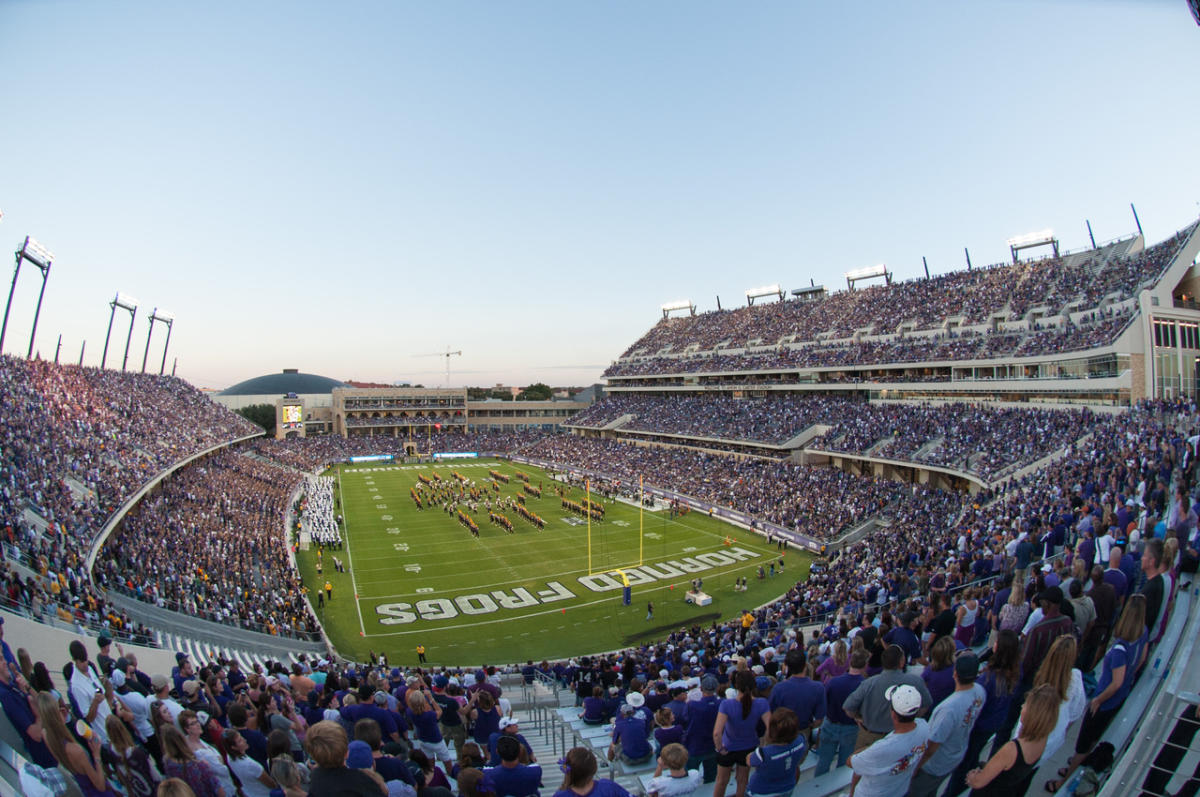 When the TCU Horned Frogs football team started to attract crowds larger than they could imagine, Texas Christian University in Fort Worth, Texas, knew it was time to build a new stadium. Thus, Amon G. Carter Stadium, an open-air football stadium located on the campus of TCU was constructed.

This arena was named after Amon G. Carter, a prominent Fort Worth businessman, newspaper publisher, and city booster. Other than its official name, it also has several popular nicknames, the most popular being “The Carter” and “Hell’s Half Acre” (a reference to the site in Fort Worth’s wild west past, which was located near the stadium, as well as the difficulty opposing teams have won in the stadium).

The history of the stadium started in 1923 even though it was only built in 1929. It all began when TCU received a generous donation from Mary Couts Burnett. She was the widow of a wealthy and well known Texas rancher. The Burnett donation constituted the egg for TCU’s endowment for a new stadium. The only condition of the Burnett donation was that a portion of it would be used for the construction of a new library. It was then decided to build the Mary Couts Burnett Library where the school’s athletic field, Clark Field, was then located.

The removal of Clark Field necessitated the construction of a new field for athletic competition, especially football. In 1896, TCU played its first season of football and since then had built a reputation of excellence. Their skills garnered national attention and they soon joined the Southwest Conference in 1923.

In 1928, the school received another generous gift from Amon G. Carter. He was at the time the publisher of the Fort Worth Star-Telegram. Carter asked Andrew Poyar, one of the designers of Shields-Watkins Field (now Neyland Stadium), to create the blueprints for the structure of TCU’s new stadium.

Constructions began from 1929 to 1930 with an original seating capacity of 22,000 for the Amon Carter Stadium. The stadium was christened by its first football game on October 11, 1930. To everyone’s joy, TCU defeated the University of Arkansas. Thereafter, head coach, Dutch Meyer, led the Horned Frogs to win national championships in 1935 and 1938.

In 1985 and 1991, more improvements were made to the seating. Old seats in the lower bowl were replaced with aluminum bleachers. The upper-deck seats were later replaced in the same way. However, this reduced the stadium capacity to 44,008 spectators.

In 1992, the artificial turf, which had been in place since 1973, was replaced with natural grass.

Since 2003, the stadium’s playing surface has been named W.A. “Monty & Tex” Moncrief Field, usually shortened to Moncrief Field. The field was named after W. A. “Tex” Moncrief Jr. and his father W. A. “Monty” Moncrief Sr. following a $3 million donation by Tex to the football program.

New club seats and luxury suites were added prior to the 2008 season. These new additions increased capacity to 44,358. The highest recorded attendance at Amon G. Carter Stadium was 50,307, which occurred in 2009 against the University of Utah.

In August 2010, TCU announced a $105 million renovation of the west side and north end zone of Amon G. Carter Stadium. The renovation is meant to better enhance football fans’ experience, upgrade amenities, and transform the historic Fort Worth icon into the “Camden Yards” of collegiate football stadiums.

The planned renovation soon expanded into a rebuild of the entire stadium above ground level, and partially below. It was only the below-ground-level playing field and lower seating bowl were retained. Everything else, including much of the subterranean infrastructure, was rebuilt. The West-side stands were imploded on December 5, 2010. Where else, the East-side stands were demolished during the early winter 2011. The stadium’s reconstruction was fully funded by donor support, meaning there are no bonds nor debt. The project was fully completed in 2012 at a total cost of $164 million. The 2012 home season was the first time an entire season was sold out at Amon G. Carter Stadium.

In 2018, TCU Director of Intercollegiate Athletics, Jeremiah Donati, announced a new construction plan with completion in time for the 2019 season. The budget for the new project is at $100 million to create more premium seating expansion of Amon G. Carter Stadium. The new Legends Club and Suites will include over 1,000 club seats, 22 luxury suites, 48 loge boxes, and two private clubs. There will also be a 100-foot outdoor balcony overlooking Frog Alley, the TCU campus and downtown Fort Worth as well as additional premium space that can be used for outside events on game days.

Ticket Policies:
Find out more about our ticket guarantee and other ticket policies.